Justice Lewis F. Powell Jr. had been a Retired Justice for six years when Ruth Bader Ginsburg was nominated to serve on the Supreme Court. They did, however, have some interactions. On learning of the nomination, Powell wrote to her saying, “Your nomination to fill the vacancy on this Court created by Byron White’s retirement pleases me. … I have admired you dating back many years. I look forward to having you here at the Court.”

Justice Powell was no doubt alluding to Ginsburg’s appearances as an advocate before him and his fellow Justices in such cases as  Frontiero v. Richardson, Kahn v. Shevin , Weinberger v. Wiesenfeld, Edwards v. Healy, Califano v. Goldfarb , and Duren v. Missouri. 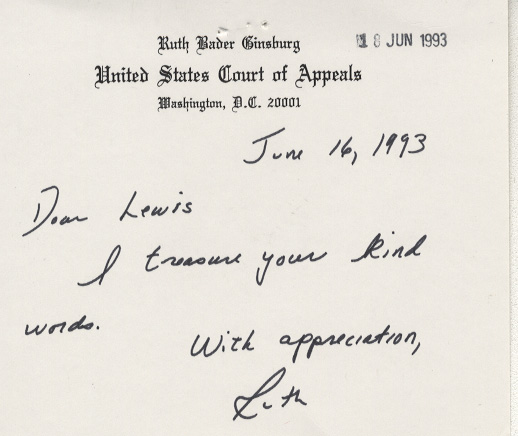